Creativity is lauded as vital, and seen as the lifeblood of great entertainment, innovation, progress and forward-thinking ideas.

Who doesn’t want to be creative, or to hire inventive employees?

Creativity is identified as the single most important leadership trait for success, enabling businesses to rise above an increasingly complex environment.

Outwardly, we praise innovation. Inwardly, we harbor a visceral aversion to it.

For something to be truly creative, it has to depart from the status quo. That departure from certainty makes many people uncomfortable. When that certainty is challenged, a bias against creativity develops.

Recent studies show that even as people explicitly aspire to creativity and strongly endorse it as a fundamental driving force of positive change, they routinely reject creative ideas and show an implicit bias against them under conditions of uncertainty.

New ideas bring uncertainty, a state which people feel a strong motivation to diminish and avoid. They also worry about whether the idea might fail, and about the potential social rejection when expressing the idea to others.

The emerging science of implicit bias has revealed that what people say about creativity isn’t necessarily how they feel about it.

We actually harbor an aversion to creators and creativity; subconsciously, we see creativity as noxious and disruptive.

Studies have demonstrated that this bias can potentially discourage us from undertaking an innovative project or hiring a creative employee.

The reasons for this bias against creativity can be traced to the fundamentally disruptive nature of novel and original creations.

Creativity means change, without the certainty of desirable results.

“We have an implicit belief the status quo is safe,” said Jennifer Mueller, a professor of management at the University of San Diego and a lead author on a recent paper about bias against creativity.

“Leaders will say, ‘We’re innovative,’ and employees say, ‘Here’s an idea,’ and the idea goes nowhere,” Dr. Mueller said. “Then employees are angry.”

The people invested in the status quo have plenty of incentive not to change.

I think another reason for the bias against creativity may be the perception that something can either be creative or practical, but rarely can it be both.

That creates another problem! People in uncertain circumstances may really need a creative solution and yet have trouble accepting it.

The second problem is that the more we seek to create tools to make life predictable – from packaged foods to GPS devices to smartphones – the more we diminish aspects of our brains capable of dealing with the unexpected.

“Creativity is being comfortable with having ideas and not fearing being judged when you put your ideas out there.”

As Clint Eastwood once said: “If you want a guarantee, buy a toaster.”

With the challenges we are facing, we need to rethink what creativity means.

It is certainly not just about painting or drawing or art. It’s about problem-solving. It’s the flexibility of our mind, the ability to see things that no one can see, and envision something entirely different. We are creating the future, bringing about change. And there is something incredibly empowering about that.

Have you had ideas that you are too afraid to bring to life? What would you do if there was no one around to judge you, tell you that you can’t, or if the preconceived notion that it’s too ‘tough’ didn’t exist? 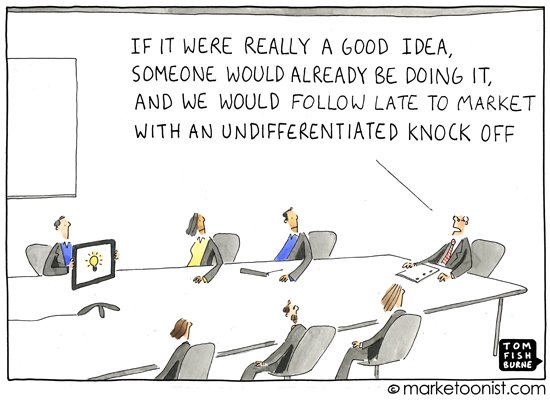